» HOW WE HELP » THE WAY TO HAPPINESS

The international network of volunteers and supporters of The Way to Happiness now spans 186 nations.

In many cities, Way to Happiness volunteers have implemented the precept “Safeguard and Improve Your Environment” by undertaking cleanup efforts to remove bottles, cans and trash from their neighborhoods.

Thousands of schools have participated in “Set a Good Example” contests, in which youth take an active role in building responsibility, competence and trust. An independent review of the Way to Happiness programs in schools found that 90 percent of participating teachers noticed a positive change in their students’ attitudes.

WAY TO HAPPINESS VOLUNTEERS have used the BOOKLETS in CRISIS ZONES to BRING CALM and HELP QUELL VIOLENCE.

The Way to Happiness is also used on sports fields and in gymnasiums as a tool for promoting good sportsmanship and fair play. Through character education programs, student athletes develop common-sense values that can help them achieve high levels of performance as individuals and team members.

Professionals and business owners have spread The Way to Happiness in their communities by sponsoring contests and campaigns aimed at making schools safe and drug free.

The precepts of The Way to Happiness are utilized in countless other ways. As conveyed by a community advocate in Los Angeles, the booklet is effective in resolving day-to-day conflicts:

“We’ve had a very good response from people in our community since distributing The Way to Happiness. At our local building project there were a lot of problems between tenants: disputes, lack of respect and a lot of crime. The building manager gave books out at the monthly tenant meeting. As a result she noticed a significant change—and the crime rate was going down too. This was from the book.” Way to Happiness volunteers, dedicated to improving moral standards and creating a positive impact on the community, distribute booklets everywhere.

The Way to Happiness is also a provenly effective tool in crime prevention and criminal rehabilitation. It has been used effectively in penal institutions, juvenile facilities and community crime prevention programs. It is also the core element of the Criminon Program, a nonprofit organization dedicated to the rehabilitation of penal offenders. The program is at work in more than 1,500 prisons worldwide and has serviced some 150,000 inmates in 38 nations.

The Criminon Program directly addresses the cause of criminality by restoring self-respect and by equipping offenders with life skills, returning them to society as positive and contributive members.

The materials, available free of charge, provide the tools necessary to help offenders regain their self-respect and turn away from a life of crime. It is available from both Criminon and the Way to Happiness Foundation.

Prisons using reform programs based on The Way to Happiness have reported dramatic drops in recidivism rates, even among the most hardened offenders.

The Way to Happiness Online Education

The Way to Happiness iPad and iPhone Education Application
THE WAY TO HAPPINESS
CREATING A WORLD OF HONESTY, TRUST & SELF-RESPECT
REQUEST A FREE DVD This free DVD includes an introduction to our program, twenty-one public service announcements and a preview of The Way to Happiness film.
Free DVD »
VISIT THE 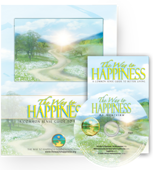 Is there a way to effectively improve the conduct, honesty and responsibility of young people?
Order a FREE The Way to Happiness Booklet and Information Kit
REQUEST KIT »